To acknowledge the vital role Dads play in families, cultures and communities worldwide.
To showcase good men from different walks of life who are fabulous positive non-violent male role models.
Through this campaign, we will be publishing a short interview with a different Dad on each day of the month of June.

David Reeves-Oxford from the UK is an artist for Microsoft and runs a photography business. He recently became a father to a son, Felix. David states, “I feel I have had a fortunate and free-thinking upbringing through which I always enjoyed creative pursuits. I have a wonderful career, family and believe myself to be incredibly lucky to have a son who, to me, is perfect.” 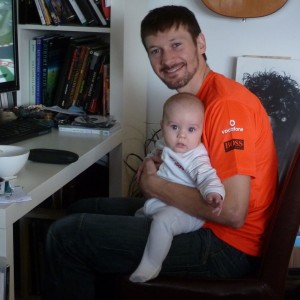 The best thing about being a Dad is feeling love for someone like you didn’t know you could. Appreciating the little things in life that you do with your baby, just making them smile makes your whole day better. Giving your life a new sense of perspective as your mind opens to the new amazing world of being a parent.

My father was my first role model. He grew up in a more modern world where there was little inequality, so I’m fortunate enough to be born into a good upbringing. I played with groups of friends as a boy, some of which were girls and we were all the same. I feel from those experiences I was raised with a due respect toward and a modern view of women in society.

I feel that fathers and male role models start our young men and boys off with good parenting and upbringing. As my parents gave me the right education, I didn’t have to think about it, it as part of our upbringing. I endeavour as a father to do the same for my son. The media also have a responsibility to forward equality and respect toward women. I was at a recent concert and saw how powerful music and male role models within the music industry could also be far reaching.