Our fourteenth “30 For 30″ 2013 Dad is Richard Schellenberg from the United States.

Richard Schellenberg is a Technical Architect for the Virginia Department of Taxation and Co-Owner and Master Engineer of the Etching Tin, a music recording studio located in Richmond, Virginia, USA. Richard is a talented musician as well, currently playing in two bands. He became involved in supporting anti-violence work when he met and married his wife, Carol and combines his support of ending violence with his work in the recovery community. Richard is the proud father of a nineteen year-old son, Eli. 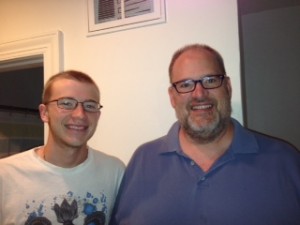 Being a father is very fulfilling to watch your child grow up, from the first baby-steps to adulthood. I did not get to spend as much time with my son as I wanted to when he was younger. Now that he is living with us, it is a joy to see who he has become, both the things that are so very much like me and the things that are unique to him.

My father had a modern viewpoint on women during his time, although it might seem conservative by today’s standards, and was considered progressive. He supported my mother’s career interests and was probably more engaged in the house than most men of his era. I always saw him respect my mother and my sisters and so I grew up having that same respect. I try to instill this in my son, that one can be a better man and human being than is always modeled in media or society. My father always taught me to think beyond what is being presented and seek truth and fairness.

It takes a lot of courage to speak up when the conversation turns misogynistic and to step up to steer the conversation and inform them that you don’t tolerate that behavior or attitude. I try to model positive behavior and speak up against sexism and attitudes that accept violence against women when I hear comments. I think always verbalizing objection to stereotypes and misogyny and being active in verbalizing respect is an effective tool to help educate young men to grow up respecting women. I think it is important for men to be active bystanders and verbalize positive statements to be effective role models.