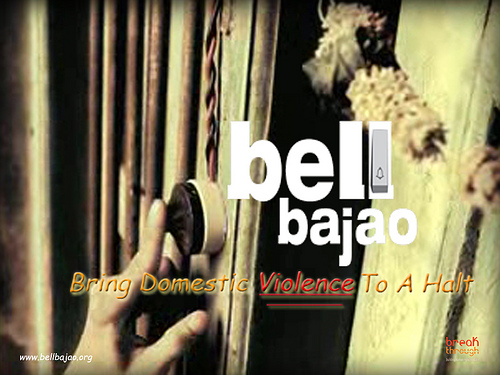 6. “We can’t underestimate the profound power and engagement that social media allows women who have historically had to really fight to be heard.” Social media activism is essential to the work that Breakthrough and Bell Bajao does. How can women and men who have no experience of activism harness the power of the internet to invoke change and galvanise support for women’s human rights?

The internet and social media have emerged as powerful tools to raise awareness about issues as well as demand change. The recent gang rape in Delhi probably would not have gotten the kind of mainstream media attention that it did if Twitter and Facebook had not exploded with outrage. We are now experiencing a digital public square where the online and the physical worlds are becoming increasingly interrelated. This requires women and men who have been working in the field of social change to become conversant with both the opportunities that this new world creates as well as its challenges. Opportunities enable voice, participation, and advocacy; and challenges include safety, privacy and government oppression. We need to become fluent in both sides of this new social media world.

7. Breakthrough has a lead campaign to raise awareness and combat the ‘War on Women’ amongst immigrant communities in the United States. Most notably, in the state of Alabama. Recent changes in the law have curtailed immigrant women’s rights considerably. Please tell us more about how women’s lives have been affected in the U.S. and how Breakthrough is campaigning for an end to this discrimination.

For the last decade, Breakthrough has been addressing the impact of 9/11 on immigrant communities in the United States. The broken immigrant system along with very harsh enforcement measures that have led to the detention and deportation of hundreds of thousands of immigrants has had a particularly negative impact on women. Women fear calling the police when they face domestic violence or sexual assault; women in detention centres deal with rampant sexual abuse; women have been separated from their children and families – the list goes on. In the United States, all of the ways in which women experience violence and discrimination, are exacerbated more so for women who are immigrants and women of colour.

We launched a campaign last year called “I’m Here” that called on people across the country and globally to stand up for the rights of immigrant women. The campaign was based on a case testimony of a woman who chose not to call law enforcement when her daughter was sexually assaulted for fear of deportation. This campaign is comprised of a video titled, “The Call.” We incorporated a focused outreach strategy using Twitter and Tumbler networks that allowed us to engage millions during the US Presidential campaign.

We are now working to ensure that new immigration policies protect and respect the rights of immigrant women. It’s at the top of President Obama’s agenda and it’s going to be a hard fight but we’re hopeful that this time around we will be able to get fair immigration policies in place.

8. You have been described as a leading innovator and cultural game changer. What motivates and inspires you to carry out your vital work?

My biggest inspiration comes from the human spirit and the resilience and beauty with which victims of abuse transform their lives into not just becoming survivors but leaders for change. I am always struck by how creative and innovative human beings are and what an incredible world we could create if we could just get rid of the violence and discrimination. I also believe that if we could find a way to bring everyone to the table to challenge the power structures that lead to the abuse and to think about how to create a win-win situation where we could all be part of the solution; that we could build the new world that we dream about even faster.

9. How can people support the work of Breakthrough and Bell Bajao?

At this moment in history, we really feel that if men join women in challenging violence against women that we could see a tipping point on this issue. We’d love to have people partner with us on the One million men One million promises campaign. Women should reach out to the men in their lives and encourage them to step up and men should make pledges that promote women’s equality in whatever ways they can. And of course, we could always do with financial support so if folks think we’re on the right track, do send some resources our way.

10. Finally, in your considered opinion, how can we end violence against women in our societies today?

All of us need to understand that price that society pays for violence against women. Children who grow up in violent homes are at risk to become abusers or victims. Violence against women legitimizes gang violence, state violence, war and conflict – and all of us end up losers. We also pay a huge economic, political and health cost globally for this human rights pandemic. And it is so easy to stop. We need men to step up and challenge themselves and other men to say Basta, enough. It’s time to stop the violence and unleash the potential of men and women to create a safer more beautiful world for all of us.