“It’s important for women to know their rights in a country like Afghanistan.” 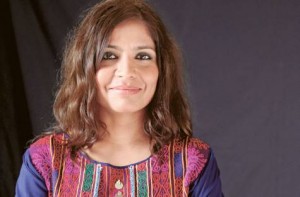 Zarghuna (Zari) Kargar, author of “Dear Zari”, opens her collection of stories with these wise, resonant words. Born in war-torn Kabul in 1982 Zari was commissioned in 2005 by the BBC to broadcast “Afghan Women’s Hour” on the BBC World Service. “Dear Zari” was a magazine style series which gave a platform and a voice to some of the most marginalised victims of a profoundly patriarchal society. These women were able to retell their stories through the safety and anonymity of the medium of radio, and then in turn many thousands of women across Afghanistan had an opportunity to listen, discuss and find solace in each other’s common circumstances.

Zari has very kindly taken time out of her very busy schedule to talk with The Pixel Project about the stories in her book, the huge problem of domestic violence in Afghanistan and a way forward for the future.

1. You met so many remarkable women during your time on “Afghan Women’s Hour.” I’m sure it will be hard to choose, but which of their stories has had the strongest affect on you?

It is true; during my work on the AWH I met so many strong women from across Afghanistan. The reason I chose to write stories of twelve women is that, each of the women in Dear Zari has had a special and deep affect on me, they have empowered me in a very personal way. But if I am to choose one I would say Shireenjan. I met her when she was old, she was given a way to another family in order to settle dispute with them while she was only nine. But I remember with all the hardship she had faced, she still was kind, funny and she had love for her family. She is one of my heroes.

2. Your book has shone a light on the plight of many Afghan women. Before you published “Dear Zari”, what did you hope your book would achieve?

During my work on AWH, every time i heard a story told by Afghan women, I felt there were such important messages in all of them that it should be told to the world. Afghan women for the first time found voice through radio in Afghanistan but I wanted to share their stories with the world and give them a voice.

I always aimed at working for human rights and specially for rights of women in Afghanistan and I thought writing about them, sharing their experiences means I can keep their voice after it has been on radio. I could let the international community (who is involved in their fate) know about their lives, struggles, pain and needs of women in my country. I thought the only way I could reach this aim is to write their stories.

3. It is now 10 years since International forces led an invasion of Afghanistan. One of the reasons cited for the invasion were the human rights violations against women. Have things improved for women 10 years on?

If we look at Afghanistan today, yes things and life of women have improved. Ten years ago, girls were not allowed to go to school, women couldn’t leave their house without a male relative, women had no right to work outside, and their human rights were violated openly. Now we have women working in the Parliament, girls can go to school and most important, violations get reported and more and more women speak out about violence. But Afghan society is very traditional, it still has the highest rate of maternal mortality, women face young and force marriages, education and health facilities are limited, they don’t have legal support and are still considered second class citizens. So a lot of work still needs to be done.

4. We understand that you are working for the BBC World Service and that you are also carrying out many educational projects with young people in Afghanistan. Please tell us more about them.

Besides my work for the BBC world service as a journalist, I work with a charity called ‘10×10 Educate girls, change the world!’ I also lobby for better education for Afghan girls and I am actively involved in promoting educations for girls. I am at the moment writing the life story of a young Afghan girl who had a force marriage and has dream of going too university for 10×10. The story will be published next year along with nine other stories of school girls from deferent developing countries. It is all about promoting education for girls and a documentary of this story will be coming out next year too.

5. Looking to the future, how can we help the women of Afghanistan?

I think by letting politicians and policy makers know that if they forget Afghanistan, it means they forget women and human rights. Every policy they make, women rights in Afghanistan should be taken care of. Afghan women do not want to lose what they have achieved and the rights they have gained in the last years. They are scared of going back to the dark period of the Taliban. They need education and Afghan girls need the help of the world leaders and policy makers to become educated mothers in the future.

Check back tomorrow (Monday) for part two of our interview with Zari Kargar.