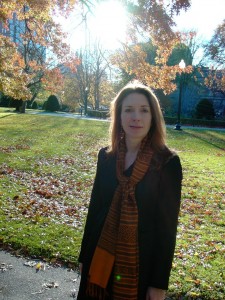 Karestan Chase Koenen, M.A., Ph.D., is an Associate Professor of Epidemiology at Columbia’s Mailman School of Public Health and Harvard School of Public Health where she does research and teaches about psychological trauma and post-traumatic stress disorder. She served as a Peace Corps volunteer in Niger from 1991-1992. She testified about the rape she experienced while serving in Niger and the need for reform of the Peace Corps rape response protocols at the House Foreign Affairs full committee hearings “Peace Corps at 50.”

Dr. Koenen is a licensed clinical psychologist and epidemiologist who uses a developmental approach to examine the interplay of genetic and environmental factors in the etiology of stress-related mental disorders, such as post-traumatic stress disorder and depression. For this work, she was awarded the Chaim Danieli Young Professional Award from the International Society for Traumatic Stress Studies and the Robins-Guze Young Investigator Award from the American Psychopathological Association. She has published over 125 scientific papers and co-authored several books including Treating Survivors of Childhood Abuse: Psychotherapy for the Interrupted Life with Drs. Marylene Cloitre and Lisa Cohen. She has received over $10 million in research funding from the National Institute of Mental Health, the Robert Wood Johnson Foundation and the Kaiser Family Foundation. Dr. Koenen is currently President Elect of the International Society of Traumatic Stress Studies. She is also an experienced clinician who specializes in working with women with post-traumatic stress disorder. She received her B.A. from Wellesley College, her M.A. from Columbia University, and her Ph.D. from Boston University.

1. Could you share with us a little bit about yourself and what you currently do at the moment?

I recently moved to New York City to take a position as an Associate Professor in the Department of Epidemiology at Columbia University Mailman’s School of Public Health. I am leader of the Psychiatric-Neurological Epidemiology Program within the department. I spend most of my time doing research related to the causes and consequences of trauma exposure and post-traumatic stress disorder. I also teach and mentor students. I am also a mom and have a 5-year-old son named Lorcan.

2. What initially drew you to the Peace Corps?

I joined the Peace Corps because I wanted to make a difference in the lives of women in Africa. My parents placed a high value on public service – from a very young age I was told, ‘To he whom much is given much is expected.’ When I was at Wellesley College, I studied economics and was quickly drawn to development economics. I had decided I could ‘make a difference’ by becoming a development economist who specialized in issues related to women’s economic security and advancement. I saw my Peace Corps service as my first step in that career.

I entered the traumatic stress field as a graduate student in 1994 but did not speak about my rape to anyone in my professional circle until 2011. Only my family and closest friends knew. So it took me a long time to speak publicly.

Jessica SmoIchek, Casey Frazee, and the other women who spoke about their experiences on “20/20” gave me the strength to come forward. They are my personal heroes.

4. What were some of the challenges that you faced when you had to confront the way Peace Corps dealt with rape among its staff?

We faced three major challenges. The first was denial that rape was a problem in the Peace Corps at all. The denial took several forms. For some, it was an attitude of ‘what do you girls expect going into these types of countries.’ For others, it was ‘rape happens everywhere. It’s not any more or less of a problem in the Peace Corps.’ So our first task was to document that rape and sexual assault were prevalent among Peace Corps volunteers. We did this by comparing the incidence of rape among female Peace Corps volunteers to the incidence among women of the same age in the U.S. general population. We found that a women’s risk of rape was 5 times higher when she entered the Peace Corps.

The second challenge being seen as disloyal by the Peace Corps and its supporters. I recall one congressional staffer telling me on the phone, ‘Don’t you girls know you are just being used as a tool by the right wing to defund the Peace Corps.’ I was told explicitly that ‘the Peace Corps is a family and we keep our business within the family.’ We worked hard to demonstrate that our intention was to build a safer, stronger, better Peace Corps – not destroy it.

The third challenge was convincing the Peace Corps itself and Congress that we needed legislation to make sure reforms were codified and monitored. There is a natural resistance within federal agencies against Congressional control – and the polarized political climate in Washington, D.C., makes it difficult to pass legislation at all. We were fortunate to have strong allies in the Senate and the House – Senators Isakson and Boxer and Congressmen Poe and Berman – who supported us every step of the way. Their staff worked closely with the Peace Corps to make sure the legislation would result in real, sustainable, change.

5. You’ve gained some progress since beginning your advocacy work, including the passing of the Peace Corps Volunteer Protection Act. Can you tell us a bit about what it took to get you there?

The passage of the Kate Puzey Peace Corps Volunteer Protection Act was the result of an coalition effort. I feel like I described this best in a blog I wrote for the Huffington Post: http://www.huffingtonpost.com/karestan-c-koenen/peace-corps-kate-puzey_b_1105721.html.

Briefly, it took the tireless investigation by Anna Schecter and Brian Ross and their coverage of the problem on “20/20.” Without the media attention, we would never have gotten the bill passed. It also took the support of the Puzey family – whose daughter Kate was murdered by a Peace Corps staff member whom she reported was abusing girls in her school – to see our struggle as one that Kate would have believed in. The full house foreign affairs committee hearings ‘Peace Corps at 50’ were also crucial.

Then there was the support received from people we have and never will likely meet – the emails from strangers encouraging us in our efforts – kept us going.

This is part one of our interview with Dr. Koenen. Part two will be posted tomorrow.