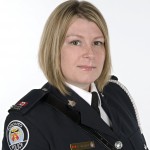 Shari McKay is a police Sergeant working in downtown Toronto. She has been a criminal and major case investigator for the majority of her career. In May of 2009, a friend, Ann Doe, confessed to Shari she had been violently raped in Texas while on a business trip, and had yet to receive justice. Shari took it upon herself to investigate further and found that the crime scene had not been visited, the suspect had not been questioned and Ann had been greatly let down by the Texas police on every level. Shari would not give up on her friend or the investigation despite being told this “wasn’t her jurisdiction” and to give up on the case. Read her inspirational interview below to find out how Shari finally got justice for her friend.

1. Please tell us how you first met “Ann Doe” and how you became involved in her case.

Ann Doe and I both had young children that attended the same day care centre. We had known who each other were and had brought our children to play at each others homes. We didn’t get to truly know each other until we started training at the same fitness centre in the spring of 2009. It was during this time we had discussed what we did for work and talked more about each others lives.

After a few months, we became friends. We would always talk to each other at the gym and we grew more familiar with each other. In May of 2009, she invited myself, my husband and a few friends to her home for dinner. My husband and I along with another couple attend. She only lives a few blocks away from my home in a village just outside of Toronto.

When we arrived at her home, she had obviously been drinking prior to our arrival. We had dinner and chatted. A short while later, she invited me to look at her new car. I along with Ann and our other girlfriend went out to the front of the house. It was then that she confided in me that she was a victim of a sexual assault.

Ann was very upset when she was telling me what had happened. She didn’t go into details at first but relayed it occurred in Houston Texas. She said she had reported the incident in the region she lived and that they had reported this to the Houston Police.

Ann wanted me to explain to her the steps of a criminal investigation. She wanted to know the reasons for the delay in the process. I told her about what I knew from my experience. I asked her if it would be all right if I made some phone calls to investigate the status of the investigation. Ann embraced the idea. She said that for ten months she had been calling investigators in Durham region and in Houston Texas. She said that she had received no answers and she knew that the perpetrator had not been charged for the offence.

2. When you tried to find out what happened in Houston, you were told that “the complaint” was reported as a “he said-she said” scenario, and the Houston police hadn’t even been to the crime scene. You were then told this case “wasn’t in your jurisdiction.” This of course shocked and infuriated you. What were your next steps?

I spoke with the assigned investigator in Houston. Police officer to police officer I asked him some questions about the case. He told me that he had sent off the sexual assault kit for forensic testing. I asked about the results and he did not have an answer for me. I asked further questions about the offender. The investigator told me that cases like this were basically “he said -she said cases” and would not result in a charge or conviction. I was curious then as to what the offender said. Surely he could not paint the picture of consensual sex. It was at this time the investigator relayed that he, nor any other police officer had spoken to the offender in regards to this case. I pressed him further and asked if the offender had any knowledge that an offence was reported. He once again told me that he did not. So then, I asked if anyone had even gone to the scene of the crime… He said that the offender worked at the hotel, and even if he had gone to the scene, the offender could have semen or whatever there as this is where he lived and worked. It was at this point I asked the investigator for his rank. He said he was an investigator. I said I wanted to speak with his supervisor. He told me that I may be a police officer in Toronto, but in Houston I had no jurisdiction. And with that, he hung up the phone.

So, from far away in Toronto, I had access to the Internet. I started my investigation on who could be this investigator’s supervisor. Somewhere along the lines the Chief of Police was. So were the deputies and Commanders. I figured the prosecutors could also put some pressure on the police so I found the District Attorney’s contact along with Houston’s mayor. I drafted a letter outlining the circumstances and the lack of police action and sent it off to them.

A few days later, I received a phone call from the Chief of Police. He relayed that his investigator had dropped the ball. He said he still thought he could save the case and he put me in contact with a Sergeant from the Sex Assault Team.

That same day, I spoke with this Sergeant and so did Ann. He invited us down to Houston. We flew down a few weeks later and the investigation was jump started.

3. What happened to Ann Doe’s attacker?

After many delays in the courts, a grand jury indicted the attacker in April 2010. In October 2010, after a 7 day trial, he was convicted and sentenced to 8 years in Jail.

4. In many countries throughout the world, rape victims do not report the crime to the police for many reasons. One of these reasons is the fear that they will not be believed or taken seriously – like what happened with Ann Doe. How can the police instill trust in rape victims, and encourage them to come forward?

Police services and departments are now investing in teaching and training their officers about the affects of sexual assault. Police are creating specialized units for officers who have training, experience and the desire to work with and on behalf of sexual assault victims.

Toronto Police Service have made it “Service priority” to encourage more victims to report sexual assaults to police. We are attending schools, workplaces and other community groups educating the public on sexual assault. We know that perpetrators need to be stopped. When victims stop reporting, offenders continue to re-offend, often escalating in the level of violence.

5. If a woman is raped, what would you advise them to do?

First, they need to get to a place of safety. Sexual Assault is a medical emergency. A victim is often in a state of trauma and they should seek medical attention. The police are emergency responders along with the paramedics.

In many circumstances, woman are sexually assaulted by people they know. This factor does not make the act any less violent or traumatic.

6. Why is it so important that a victim of rape should go to the police straight away?

I can’t say it is so important that a rape victim go to the police “straight away”. Standing on the outskirts looking in, people imagine that this is exactly what they would do if it happened to them. I know that this is not always the case. Your world is suddenly much different then before. You are in a state of shock and confusion.

As a police officer, I may say that calling the police may be the best thing to do immediately after the offence to apprehend the suspect, and to gather evidence. But for the victim of a life altering situation, survival is the most important factor at that moment.

7. Ann Doe says you “saved her and went above and beyond.” You must have a good friendship. How is Jane doing now?

Ann is doing well. She is a survivor. I am so proud of her. She is brave and so strong. Her life is different now and it will always be.

8. You have won the International Association of Women Police’s Mary Jo Blahowski leadership award. A huge congratulations as you clearly deserve this honour. How does it feel to have been recognized for your work? What do you hope winning this award will achieve?

I am so honoured and humbled for the recognition associated with this prestigious award. I learned a great deal through this tragic event and I too have changed. At the awards ceremony, alongside so many amazing police woman from around the world I felt so humbled. In my speech I talked about the amazing impact we as police officer have each and every day to help those who are vulnerable. We easily take some extra steps that can change the world of the people in our society.

9. We understand that you are writing a book about your experiences in the Ann Doe case. Please tell us more about the book and when you will launch it.

The book I am writing is a story about friendship, courage, justice and strength. It is called “Once a Victim”. I chose this title as it applies on so many different levels in Ann Doe’s life and the ordeals that followed the sex assault.

The premise of the book is to share Ann’s experience. Here is a woman who is well educated, owns three thriving businesses, a world traveller and a loving mother. She had no drug dependencies, no mental health issues and was part of the upper middle class. Then one day, she is violently raped. Her world as she knew it split at the seams. She lost every sense of security and faith in the world she knew.

This single act of violence caused her to become victimized over and over again. The police disappointed her. Her business partners took advantage of her financially. Her husband had an affair with the young babysitter. Her family encouraged her to get over the assault and not pursue it criminally. She was no longer the strong confident woman she had been. She turned to alcohol. She eventually hit rock bottom when she bought a rope and almost committed suicide.

The rape traumatized her and made her vulnerable. Then, after hitting rock bottom she rose up. She realized her life had a purpose and her strength grew. I was lucky to have been a witness to her strength.

The story follows through the ups and downs of Ann’s post trauma life and the eventual conviction of the attacker.

I am hoping the book will be ready for publishing at the end of 2012.

10. In your opinion, how can people help stop violence against women in their communities, cultures and societies?

We as a society need to teach our boys who eventually turn into men about the long lasting effects of violence against women. As a society, we have to reinforce that violence against women will not be tolerated. In reporting crimes of violence and the prosecution of offenders, we can stop sexual assaults. Too often women place the blame on themselves in sexual offenses. We must better educate women and men that the offender is to blame – not the victim. It is his actions and violence that must be condemned.