Skip to content
Home > From Our Partners > Interview with Centre for Social Research, India–Part Two

Below is part two of our interview with Centre for Social Research, discussing the organisation’s mission, current research, and its involvement with Global ‘Walk a Mile in Her Shoes’® Day.

Please tell us more about the pioneering “Women’s Reservation Bill” that CSR is championing. We understand it is set to change the face of politics in India, ensuring a more equal and fair society for women within the political system, and society as a whole.

Despite suffering from hunger, poverty, and violence at disproportionate rates compared to men, women currently make up only about 10% of India’s Parliament. The Women’s Reservation Bill would ensure that 33% of Parliament seats are reserved for women. There already exists reservation (or, quotas) for women in government at the local level in India, and research has shown that in areas where quotas have been introduced, women continue to be elected in their own right even without a mandated reservation. Centre for Social Research has been fighting for passage of the Women’s Reservation Bill for years because we believe that the best way to help the disadvantaged women of India is approach gender inequality from all levels—including at the very top. Fair and equal access to the decision-making bodies is an essential pillar of any democracy, so why not India’s?

On the International Day of the Elimination of Violence against women (November 25th) CSR staged a silent protest for the estimated (staggering) 10 million victims of foeticide. Please tell us more about this problem and how CSR are finding solutions to eradicate it.

Our research department has devoted considerable time and effort into examining the increasing challenge of female foeticide in India. The 2011 National Census revealed a sharp decline in the child sex ratio in the age group of 0-6 years of 13 points, from 927 in 2001 to 914 in 2011.

In India, the PC & PNDT Act (Pre-Conception & Pre-Natal Diagnostic Techniques) criminalizes sex-selective abortions, yet the law has yet to be properly implemented. Improvement for a better and effective implementation of the Act is a major part of the fight against female foeticide, yet at the same time, we can’t forget the deeply rooted social and cultural issues which continually reproduce causal conditions for female foeticide. Our most recent and widespread initiative to address female foeticide focused on some of these causal conditions.

In partnership with the Ministry of Health and Family Welfare, we’re now in the midst of implementing the fourth round of this study on female foeticide, entitled Meri Shakti Meri Beti, focusing on rural areas in the Haryana districts of Ambala and Kurukshetra.

One major finding of our research is that pre-natal sex selection cannot be addressed as an independent issue. Rather, it must be examined as a socio-cultural phenomena deeply intertwined with issues as far reaching as alcohol and drug dependency, patriarchal family structures, dowry, domestic violence, educational opportunities and costs, bride trafficking and more. We’ve also discovered that the PC/PNDT Act continues to be minimally if at all implemented due to unwillingness of district authorities to act according to the law.

Human trafficking is becoming a deeply worrying global problem, affecting mainly vulnerable women and children. I understand that the CSR is finding solutions to combat the trafficking of women in India. Please tell us about the situation of trafficking in India and ways that CSR is fighting it.

India is a country of origin, transit and destination for thousands of trafficked persons in the South Asia region to the Gulf States, Europe and North America. Statistical evidence regarding human trafficking through and within the South Asia region speaks to a problem of epic proportions: For example, approximately 5,000-7,000 women and children are trafficked from Nepal to India ever year. Roughly 89 percent of trafficking in India, however, occurs between domestic states and territories.

On paper, India maintains strong legal frameworks regarding the criminalization of human trafficking and prosecution of involved actors. On the ground, however, the story is appallingly different, and India’s legal mechanisms are rarely implemented in order to catch and prosecute human traffickers, or rehabilitate and protect trafficking victims. The Government acknowledges a need to build the capacities of law enforcement agencies, social activists and the media toward full empowerment with knowledge, skills and appropriate attitudes to enable an effective and efficient approach to human trafficking.

CSR continuously operates as an agent against human trafficking: lobbying political bodies and conducting research studies emphasizing the gender dimensions of trafficking and post-trafficking rehabilitation. Most recently, CSR answered the Government’s call for capacity building in conducting intensive anti-human trafficking trainings. In May of this year, we held a three-day National Workshop on Anti-Human Trafficking for Nodal Officers (Police Workshop) in cooperation with the Ministry of Home Affairs of the Government of India. In order to ensure sustainable results from the workshop, Centre for Social Research has agreed to facilitate additional police trainings on the challenge of investigating human trafficking cases on a state or district level. CSR also maintains membership in the South Asian Network Against Trafficking (SANDT).

How can the average person, in their own communities, help to end discrimination against women?

Helping to end discrimination against women must begin within the homes of every man, woman and child. Children must be raised in an environment that does not discriminate or neglect on the basis of gender, and that values and rewards children of both genders equally. We must all ensure that our own families and relationships do not promote or sustain discriminatory practises, beliefs or attitudes in our own lives. This is true as much for women as it is for men. Even in the most underprivileged or grassroots communities, positive change toward gender justice is possible. We’ve witnessed and continue to encourage community-led efforts to spread awareness through demonstration: treating all members of your own community equally, and speaking out against injustice and not passing a blind eye to those who discriminate against women. Individuals must make efforts to confront prejudice, whether that means comforting a victim of domestic abuse, refusing to participate in a practice such as sex selective abortion or confronting sexual harassment in the streets. Changing attitudes is never an instantaneous or simple act. Rather, evolving mindsets—especially toward gender—is a gradual process that can and should begin with each member of a family, community and society.

How can people around India and the world support CSR?

As an organisation, we’ve taken a big leap forward this year in increasing our presence on the Internet, and we’re very pleased to be attracting supporters, donors and volunteers through our website and social networks.

We invite anyone from around the world to reach out to us on Facebook, Twitter, YouTube and Flickr—whether it’s to gain specific insight into women’s issues in India, sign one of our online petitions, or just start a conversation! We appreciate every bit of support for our projects and programs: whether it’s the vital and irreplaceable efforts of our local and international interns, or gaining a new Twitter follower or engaging in a dialogue with a Facebook commenter. That said, we’re deeply indebted to the generous support of our local, national and international donors and, of course, we always welcome contributions from individuals, groups and institutions. As a local non-profit organisation, even the smallest financial contribution can have a huge positive impact on our work and can change the lives of all of those women and girls we count as constituents.

You are hosting the New Delhi Global “Walk a Mile in Her Shoes” Day event which is being organised by The Pixel Project and Venture Humanity. For our readers who don’t know about this event, please tell us a bit about it and what CSR is hoping to achieve with it.

Walk a Mile in Her Shoes® was started a decade ago by Venture Humanity with the aim of providing men with a platform for standing up and speaking out against violence against women (VAW). This year, Venture Humanity has teamed up with The Pixel Project—an Internet-based, volunteer-driven global movement to end VAW to organize the inaugural Global ‘Walk a Mile in Her Shoes’® Day on Father’s Day, 19th June 2011. For the New Delhi Walk, proceeds will be shared between us and The Pixel Project’ Celebrity Male Role Model Pixel Reveal campaign. 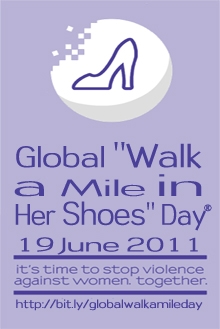 Indian men have often been characterized as deeply engrained with a mindset geared toward gender discrimination and patriarchy. Yet as our country continues this period of rapid economic, political and social change, a new consciousness has taken root. Today, men across India have begun to openly express disapproval toward and rejection of the subjugation of women that continues in so many spheres of life.

We at Centre for Social Research believe that men are vital allies and active participants in the fight to end Violence against Women in India. This inaugural Indian edition of Walk a Mile in her Shoes® provides a public platform for men to make a tangible and demonstrated show of solidarity in ending VAW, while the excitement and guaranteed fun of the event itself will allow us to increase awareness abut VAW by attracting a wide pool of participants and supporters on the big day. Also, because VAW remains a taboo topic for discussion in many circles, this event is an attempt to bring a spotlight on the issue and make it a part of mainstream debates and discussions at grassroots as well as policy levels.