Julie S. Lalonde is an award-winning social justice activist based out of Ottawa, Canada.

Julie works with various women’s organisations in the areas of sexual violence prevention, peer support, reproductive justice and feminist gerontology. She is the director of Hollaback!- Ottawa, where she works to end street harassment in the nation’s capital. Julie developed and now manages the provincial campaign Draw-the-Line.ca, which aims to end sexual violence by engaging bystanders.

She has won numerous awards for her work, including the 2013 Governor General’s Award in Commemoration of the Persons Case; the most prestigious award for feminist work in Canada.

The second part of her interview will be published on June 30, 2014 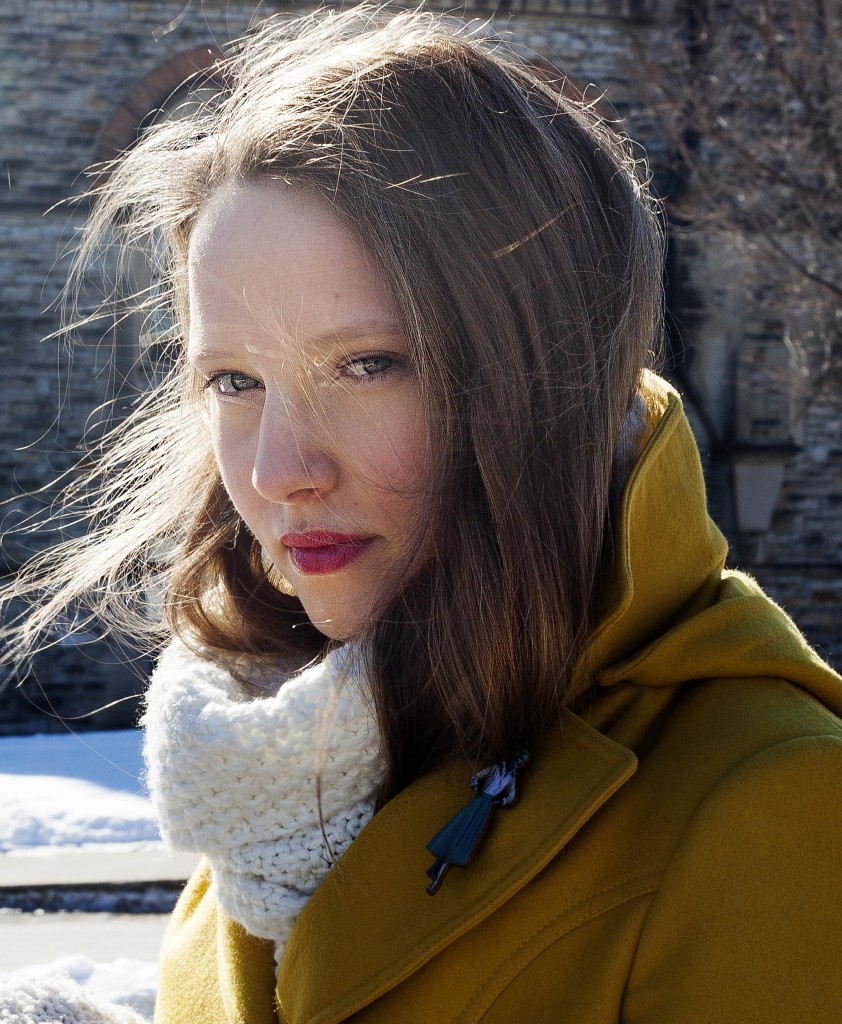 1. “Challenging the Status quo” is the strapline for your online home, Yellow Manteau. What is the status quo and why is it so important to challenge it?

The status quo dictates that women must be submissive, polite and “not rock the boat”. The current status quo dictates that sexual violence is a rite of passage for women. I cannot tolerate being silent about living in a rape culture. I cannot go to bed at night knowing that rape culture exists but doing nothing to stop it. I know that eradicating sexual violence means challenging the status quo and in turn, being really unpopular, but I do it anyway.

2. The “About me” section on your website opens with Alice Walker’s beautiful quote, “Activism is my rent for living on this planet.” How did you first become involved in women’s rights activism and why do you feel activism is particularly important in ending violence against women?

I’m the first person in my family with a university degree. When I moved to the “big city” to go to post-secondary education, I was not just looking to get a piece of paper to put on my wall. I had clear instructions from generations of folks in my family that I had to use my privilege as an educated person to make the world a better place.

Post-secondary education helped me see that all those instances of violence that my friends and family had experienced were not isolated incidents but rather a systemic issue. A fire was lit inside me and so far, it’s still going strong! Violence against women will only be eradicated by grassroots organising and tireless activism on the ground. It’s exhausting but ultimately, fruitful work.

3. You are a public educator against sexual violence and you work with young men on ending rape culture, sexual assault and street harassment. Tell us about the workshops you offer and why working with young men is so important.

I find working with young men equal parts important and difficult. I am a woman. I am read as a woman and so there are clear gender dynamics between myself and the young men I work with. Often, young men either tell me what they think I want to hear or they stay silent, giving me side eye during the entire presentation. I don’t blame them! Gender roles are so unbelievably strict and any young man who dares to step outside them and question masculinity, gender performativity, etc. is very, very courageous.

As a public educator, I can be upset about the gender dynamics at play or I can accept them and work within them. For me, this means bringing in men to engage young men and boys. The reality is that a male ally can say the exact same things as me, but he will be taken more seriously than if I say it. I do not like it and I doubt I ever will, but rather than railing against it, I work as hard as I can to engage male allies to take on this piece. I cannot underestimate the importance of engaging men and boys. The work I do is called “violence against women” but in actual fact, it’s “men’s violence against women.” Without men at the table, we’ll always be reacting to gender-based violence rather than preventing it.

4. In the aftermath of the massacres committed by Elliot Rodger in California, the media in North America reported largely on the issue of gun control and mental illness, and completely ignored the misogynistic nature of the fatal attacks. Fortunately, feminists and activists like you took to the blogosphere to call out the nature of the attacks. What is your assessment of the media coverage after the shootings and how can the media in general improve coverage of violent, sexual and fatal attacks against women?

I am consistently frustrated by how the media treats incidents of violence in isolation. Whether it is gender-based violence, racism, homophobia, trans-phobia, able-ism, or other forms of discrimination, each incident is treated as one-off and the mainstream media rarely, if ever, tries to connect the dots.

I am so invested in how the media talks about issues of violence against women because issues of consent, healthy relationships and gender roles are not talked about in schools. Therefore, where do people get these ideas from? The media and popular culture are literally educating folks on what sexual violence looks like, what consent is (or is not), gendered expectations in relationships, etc. It is easy to dismiss the media and popular culture portrayals of these issues if you have to alternative media, higher education or really progressive social circles. However, that is not most people’s experiences. The media has an opportunity to use these tragedies as educational opportunities for us to move forward and avoid a future tragedy. Sadly, that is not being done. Instead, we would rather paint each perpetrator as mentally ill (if they are read as white) or isolated terrorists (if they are read as men of colour).

5. The hashtag #yesallwomen trended for days after California’s horrific shootings. Women around the world tweeted about their experiences of gender-based violence, unfortunately to a chorus of men’s rights groups who tried to challenge the hashtag with #Yesallpeople and other tweets even questioning the existence of gender-based violence! What is the place for online activism in combating complacency, ignorance and denial of gender based violence?

Social media and online spaces are crucial to the advancement of feminist causes. I am the first generation of feminists to be exposed to the internet. My family was one of the few to get internet access in our small rural community and being the mid 90s, it was considered pretty cutting edge stuff. I was lucky to have a father who worked in the field, so I was exposed to the wonders of the internet far earlier than other feminists my age. I wrote for a quasi-feminist website when I was a tween and remember feeling like I had found my “home”. As a budding feminist from a rural and Francophone area, chatting with other like-minded girls from around the world helped me make sense of the anger I had about gender inequality and absurd gender expectations.

Increasingly, social media is being used by the mainstream media to get a pulse on the burning issues of the day. This is such an important opportunity for feminists whose stories and perspectives are so often relegated to the sidelines. I firmly believe that the connection between the California shooting and systemic misogyny would not have happened without #YesAllWomen. It created a rare opportunity for feminists to shed light in dark places and I am so incredibly grateful for it.