Leland has been a city councillor in Cambridge, Massachusetts since 2009 and is currently running for Lieutenant Governor. Between serving as a councillor and campaigning, he is also a new dad. He and his wife, Yin, have one daughter, Lela Marie, who was born in November 2013. In those rare moments that he has spare time, Leland likes to put his technical skills to work by building electric scooters by hand. 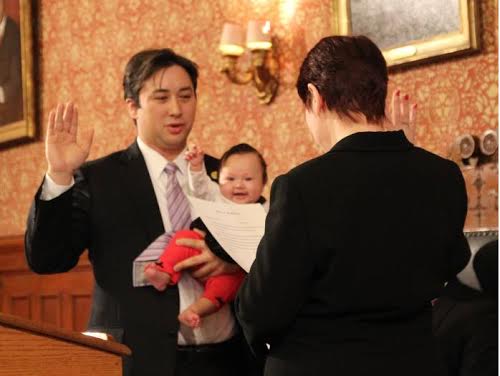 The best thing about being a dad is coming home from a long day at work and seeing Lela’s beaming smile rush up to me as I walk through the door. I spend a significant amount of time travelling to various cities throughout Massachusetts, so I truly relish those quieter moments where it is just my family and me together. Lela is growing up so fast, so every moment spent with her is precious.

I have nothing but tremendous respect for my father. As a Chinese immigrant to the United States, he took a huge chance at making a better life for his family. He was drawn to America for its unique combination of freedom and opportunity for all, including women. I credit him for instilling in me that passion to help forge stronger communities for everyone and to help make Massachusetts a better place for everyone, regardless of gender.

Dads and community role models need to step up and break the cycle of silence in regards to violence against women. For too long, this issue has not been discussed openly, but attitudes are changing. It is every man’s duty to speak out and let young men know that violence against women is unacceptable in any circumstances, and that intentionally hurting women is a characteristic of a weak man.