Skip to content
Home > Volunteer Stories > A Pixel Project Volunteer’s Story: It could happen to YOU

When I was younger, when news stories about any form of violence were aired, my parents would shake their heads and discuss them over dinner, or breakfast. It got so that as I grew up, it seemed that it was a normal part of society, one that we have no control over. All we could do was shake our heads and hope that it never happened to us.

But that’s just it. We always think that it will never happen to us. It’s always someone else. And as long as it doesn’t happen to us, we don’t really care about it. After all, the men in our lives are loving, trustworthy, decent men. They would never do anything bad to us. 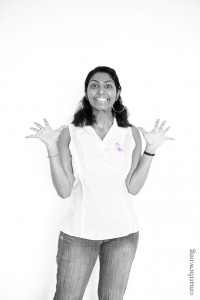 The point is, it could happen to anyone. It’s happening to someone’s mother, daughter, sister, wife, and friend. And if we don’t step up and start fighting back, there will be no one to fight for you if and when your time comes.

This is why I joined The Pixel Project: To make a difference. To make others out there aware that we cannot ignore the issue of violence against women. That together, we can make a world of difference.

So don’t say it doesn’t affect you, because IT COULD HAPPEN TO YOU.