On 23 September 2009, a local online news agency frontpaged the Sarawakian Government’s denial that the rape of the Penan girls happened. To them, such incidents were the fabrication of “negative NGOs” attempting to exploit the indigenous tribes of Sarawak, a state in Malaysia, for money.

About a month back, a local politician, Rodziah Ismail, was threatened with rape as she sat through a town hall meeting. Months before, Elizabeth Wong, a politician with the same state government, had her “nude” photos circulated; the photos had been taken while she was asleep. In both cases, the police force has been content to twaddle their thumbs. 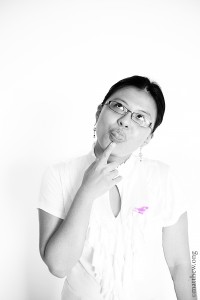 Several years ago, Nurul Huda, a cheerful 10-year old, was kidnapped, brutally raped and sodomised. After her rescue, she was passed from clinic to clinic while her brother tried desperately to save her life. Audrey Melissa was walking to school when she was set upon by her assailant. She was raped and murdered. Her murderers are still free. Nurin Jazlin, a beautiful 8 year old child, was abducted, and raped with vegetables stuffed into her vagina and anus. Her murderers are also still free.

I joined the Pixel Project originally for selfish reasons; I wanted something that looked good on my resume. That was not the only reason why I answered the call though.

Like many women, I want to have children of my own. To make the world safe for them, and especially a safe place for my daughter to be, I joined the Pixel Project. I demand a safe world for my daughter, where she won’t be censured for having a voice and a brain of her own. I demand a safe world for my son, where he can be what he wants to be, without the prejudice of society.

I demand a world, where daughters, sisters, nieces, mothers, cousins, aunts, and so many more, can walk down the street and not be accosted by men who seem to think that a wolf whistle is the highest compliment they can give a woman.

I am woman. Hear me roar!