I am a member of the United States Air Force as a Client Systems Technician/Project Manager. I am currently stationed in Okinawa, Japan with my 2 kids, Trysten and Sophia, and my wife Christie. My oldest daughter, Ella, is a freshman in Arizona State University as a Business major and is part of their competitive Cheerleading squad. I love to travel and see the world and also DJ when time permits. It’s been a passion of mine for 18 years now. Most importantly, I get to share these memorable moments and experiences with my family which will last a lifetime. 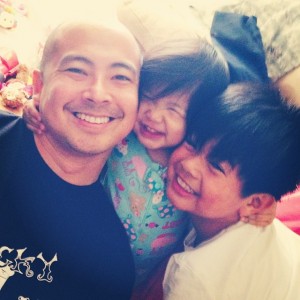 The best thing about being a dad is knowing what it means to love something or someone more than yourself. The feeling I had when I saw my children for the first time is something I could never replicate with anyone. Being a father has humbled me throughout the years. They make you want to be a better man because as a father, you want them to have a role model and a mentor who will guide them as they grow up. I want them to be able to say that “my dad was always there for us”.

I have never really had that single positive influence growing up. My father was always gone due to his job so he was never around. I guess I could say that the biggest role model to me is not just one person but a combination of people I’ve looked up to including my peers, grandfather, uncles and cousins. They’ve taught me – not through words but through their actions – about how they treat women.

Young men and boys usually emulate their role models. If these male role models set a good example on how to treat women with respect, it will most likely prevent violence. We can never completely stop the violence but if fathers and role models get involved in our children’s development and awareness during their early years, we can get them to take interest in helping to stop violence against women.